Our son Randy was a creative, handsome, humorous, loving, kind-hearted, and gentle soul.  He had his struggles from a very young age with ADHD, low executive functioning, and a slow processing speed. However, he never failed because he was also blessed with several “workarounds” including fabulous memorization skills, and high verbal and written acuity. He was a hard worker, personable, and he had an extremely strong will.  Because he struggled with impulsivity and focusing we had him psychologically tested to see how we could help him. He was tested 4 times between the ages of 4 and 16 years. Consistently he tested positive for ADHD, slow processing speed, low executive functioning skills, and mild dyslexia.  When he was 16 and after he started smoking marijuana, they added that he was suffering from anxiety and depression as well.  These were the first two of many horrible side effects today’s marijuana has on the adolescent brain that Randy would eventually exhibit. Interestingly enough, Randy thought that “weed” saved his life, but it took his life in reality.

The first time we knew Randy smoked marijuana, he was 15 years old and with the neighbor boys who were 3 years older.  He enjoyed it, was seeking acceptance/friendship, looked up to those boys, and liked getting high.  After those young men left for college, he started smoking with other kids at his high school.  It helped him fit in and for a kid with an active brain, we think it temporarily brought a sense of relaxation.  However, getting high had its consequences for Randy that he just couldn’t see due to the misconceptions that marijuana is harmless, nonaddictive, and “natural”.
After using marijuana from his sophomore year to his senior year, he suffered from anxiety, depression, suicidal ideation, aggressive behavior, and delusions.  Randy was diagnosed with Cannabis Use Disorder when he was 16. In the fall of his Junior year, he attended Wilderness Therapy. He attended 3 different high schools and graduated online. He had one 72 hour hold during his senior year after threatening to take his life because we would not allow him to smoke marijuana at home. 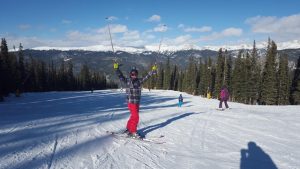 Our son Randy during happier days.

Randy desperately wanted to go to the University of Boulder.  He loved to ski, and the mountains and he made it clear he thought college was a big party.  We suggested that he attend community college close to home, in Minnesota, but he insisted on moving to Boulder.  When there was a “will” with Randy, he would find a way.  He moved to Boulder, got a job, his residency, and completed a year of community college all on his own.  By the time he was 20, he started two companies – a web design company and a clothing line.  We were very proud of him, yet very concerned since we knew he was still smoking marijuana.  He told us so and when he did come home, at times, he was irrational.  After thinking about his drug usage while living with us,  we knew that on days 3-5 without marijuana, he would be anxious, moody, aggressive, defiant, and difficult and he would exhibit that behavior during his visits.