Viewpoint:  Medical marijuana is too easy to get, with unknown consequences – Lansing State Journal

“But, after my son’s unexpected suicide earlier this year, I have found myself amazed by the plethora of brand new medical studies by prestigious organizations regarding the pros and cons of marijuana use. There is significant correlation between Cannabis and psychosis/ schizophrenia.” —Suzanne Elms-Barclay

Elms-Barclay: Medical marijuana is too easy to get, with unknown consequences

For many years, it was not clear whether marijuana could cause problems. I even smoked in the early 70s but stopped because all I did was eat everything in the house and go to sleep. And for most of us, we vaguely were aware of quotes such as this: “There has been considerable debate regarding the causal relationship between chronic cannabis abuse and psychiatric disorders.”

A 26-year-old actor who starred in the British psychological crime drama “Luther” with Idris Elba hanged himself while out of work during the coronavirus pandemic, according to a report. Luke Westlake had messaged his former girlfriend threatening to commit suicide the night before he was found dead in June 2020, the Sun reported Thursday about a hearing.

Another missing teen after psychotic break from marijuana use

A California teenager has been missing for two weeks and her family says she was “paranoid” the night before she vanished. Karlie Lain Gusé, 16, was last seen walking on Oct. 13 outside her Chalfant home at 7:30 a.m. “She didn’t take her cellphone,” Karlie’s stepmother, Melissa Gusé, told People.

She apparently left her home in this rural neighborhood a dozen miles of so north of Bishop early in the morning after hanging out with friends apparently smoking marijuana.

Whatever happened to her that night, her step mother says it had a marked effect on her behavior, leaving her alternately fearful and animated.

It’s a tragic fact that children go missing every day somewhere in this country. When it happens in a small community, the impact is greater as it touches everyone. For the past year even those passing through Bishop, California were reminded of the disappearance of Karlie Guse. Signs, posters and ribbons are everywhere.

Where is Logan Schiendelman? Young man vanishes from Olympia area

Logan Schiendelman was last seen on May 19, 2016 in Tumwater, Washington. Was he the victim of foul play, or is he lost, not wanting to be found? Logan Schiendelman’s high school days in Tumwater were filled with friends, fun and football. His athletic ability, all-American good looks and easygoing attitude brought lots of friends.

The body of an 18-year-old man, missing since mid-March, was found last week, the Sandy Police Department announced. A 911 caller reported seeing a body floating in the Clackamas River on Friday near the Milo McIver State Park, according to a press release.

By: Tod Leonard, 12/6/2016 — LA Times “Salaam — who lived in Superior, Colo., about eight miles southeast of Boulder — went to Colorado after a standout career at La Jolla Country Day. In 1999, Salaam admitted a marijuana addiction contributed to his career downfall. He lost 14 fumbles in 31 games and told ESPN he thought the issue was related to marijuana. “It probably had me out there lackadaisical instead of being out there 100 percent,” he said then. “Everybody thinks getting high is cool, you can let it go when you want to let it go. But it’s just as potent as alcohol. It’s just as potent as cocaine.”

Rashaan Salaam accomplished the improbable, rising from playing 8-man football at La Jolla Country Day in San Diego to win the Heisman Trophy in 1994. It was Salaam’s greatest achievement, earned barely two months beyond his 20th birthday, and one that he candidly admitted in the ensuing years he couldn’t match.

Coroner: Former Heisman Trophy winner Rashaan Salaam had THC in his blood at the time of his suicide

DENVER, Dec 29 (Reuters) – Rashaan Salaam, a winner of college football’s Heisman Trophy, committed suicide by shooting himself in the head in a park in Boulder, Colorado, earlier this month, a county coroner said on Thursday. A toxicology report showed Salaam, 42, had a blood-alcohol level of 0.25, three times the legal limit for operating a vehicle in Colorado. His blood also contained 55 nanograms of THC, the psychoactive property of marijuana.

DENVER, Dec 29 (Reuters) – Rashaan Salaam, a winner of college football’s Heisman Trophy, committed suicide by shooting himself in the head in a park in Boulder, Colorado, earlier this month, a county coroner said on Thursday. A toxicology report showed Salaam, 42, had a blood-alcohol level of 0.25, three times the legal limit for operating a vehicle in Colorado.

Dec 11, 2019 Elizabeth MerrillESPN Senior Writer Close Elizabeth Merrill is a senior writer for ESPN.com and ESPN The Magazine. She previously wrote for The Kansas City Star and The Omaha World-Herald. This story about 1994 Heisman Trophy winner Rashaan Salaam, a former Colorado and Chicago Bears running back, was originally published Dec.

When Hamza Warsame fell to his death from a Capitol Hill apartment building in December 2015, it sparked an international controversy and an outpouring of grief and outrage within Seattle’s Muslim community. Concerns spread that the promising Seattle Central College student had been the victim of an anti-Muslim hate crime and the Seattle Police Department was withholding information on the case.

Police: Paul Swenson discussed death with friends, family before his disappearance; traded his BMW for a bike

AMERICAN FORK, Utah – For two and a half weeks this past summer, tens of thousands of people helped look for a missing man named Paul Swenson. The 30-year-old from American Fork was a husband and new father with many friends. 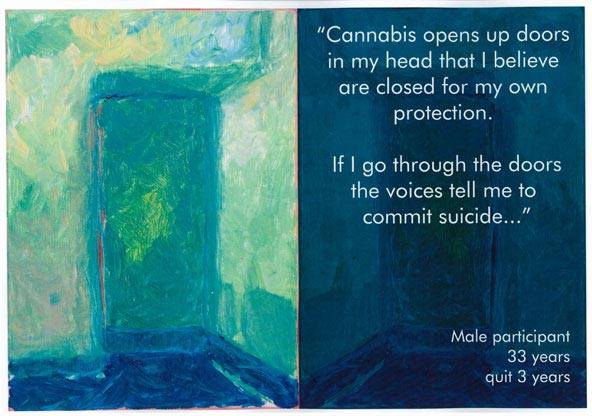 Important Research on Cannabis and Suicide

The impact of adolescent cannabis use, mood disorder and lack of education on attempted suicide in young adulthood–World Psychiatry. Oct 2014

“Hierarchical logistic regression models showed that adolescent mood disorder and adolescent cannabis use, young adult mood and anxiety disorders, and a low level of education were the most strongly predictive factors for making a suicide attempt…” Click here for full report on cannabis and suicide

“We recorded clear and consistent associations and dose-response relations between the frequency of adolescent cannabis use and all adverse young adult outcomes….substantially increased odds of later cannabis dependence, use of other illicit drugs, and suicide attempt.” Click here for study abstract on adolescent cannabis use.

“Early and frequent cannabis use are associated with an increased likelihood of major depressive disorder (MDD) as well as suicidal thoughts and behaviours. We identify associations between aspects of cannabis use, MDD, and suicidal thoughts and behaviours and examine whether such associations persist…” See abstract of this depression and suicide study.

Sabine Heinlein, Feb 23, 2017, The Guardian The state’s suicide rate is three times the national average and 16% of its people experience alcoholism or addiction. Alex’s family are the faces behind the addictions. Melissa, the oldest of Danielle’s three girls, remembers the tragic day in 2004 clearly. Then 12 years old, she had caught 13-year-old Pete smoking marijuana with a cousin. She told Danielle. As part of his punishment, he was to sit in his room, with no books, magazines or video games. As she recalls the story, Melissa is calm and thoughtful, not unlike her stepfather. She seems like the kind of person who has everything under control, but as you dig deeper, her struggle emerges. When Alex came home from work that day Danielle was in bed, like most of the time. The first thing he did was check in on Pete. He found him reading a magazine that Melissa had slipped him. “Mom said nothing is nothing,” Alex said, taking away the magazine. He went to light the BBQ to make dinner. It was a warm summer evening, and Melissa was playing horsey with her three- and five-year-old half-sisters. Suddenly, Melissa heard Alex screaming. “When I walked over to the bedroom door and looked in, I thought that they were fighting,” she remembers. “But when Alex laid my brother on the ground, I saw that he wasn’t breathing, that he was purple and blue. I ran and woke up my mom, and she started freaking out, so I grabbed the phone and called 911. Then I grabbed my little sisters and my cousin and I told them that they needed to go outside.” Alex says it couldn’t have been more than 15 minutes until he went back to check on Pete. He had hanged himself in his closet.

lex remembers taking his wife to see a psychic. The psychic came highly recommended by her doctor. Danielle was struggling. Pete, her son from a previous relationship, had killed himself in 2004. He was only 13. Alex drove 180 miles west from Rock Springs, Wyoming, where the couple lived, to Rainbow Gardens in Ogden, Utah.

Max Barry, son of Nashville Mayor Megan Barry, died from a combination of several drugs, including opioids, according to an autopsy report released Wednesday by the Jefferson County Coroner’s Office in Colorado. Drugs found in Max Barry following his death were Xanax, marijuana and two opioids – liquid methodone and hydromorphone.