Mass Murder and Daily Marijuana Use: One Example of the Worst Outcome

Jared Lee Loughner is an American mass murderer who pled guilty to 19 charges of murder and attempted murder in connection with the January 8, 2011, Tucson shooting. Los Angeles Weekly blogged at the time about what role his daily marijuana abuse played in the crime.

Important Report on Cannabis and Violence

Americans Against Legalizing Marijuana recently released a report on violence resulting from cannabis-related psychosis. The report lists many cases of murderous violence which took many lives.

Stabbing Under the Influence

A suspect with a history of drug use, a girlfriend left with over a dozen stab wounds, and a verbal intent to kill. These details and more are part of a new report describing what happened during a stabbing incident Thursday night in Bloomington.

The man shot and killed by a Lacy Lakeview officer Sunday has been identified as Dustin Demaurean Powell, a 34-year-old Lacy Lakeview resident who a court-appointed psychologist had previously recognized as needing treatment for schizophrenia.

Mohan Patel felt he had to kill himself to prevent himself from being tortured.

Gruesome Murder Could Be Related to Cannabis Psychosis

OSSIPEE – Keith Dobens, the 17-year-old Madison boy who in February was charged with killing his mother, Melissa Moulton Hatch, was ordered Thursday to spend the next five years in a secure psychiatric unit after he pleaded not guilty to second-degree murder by reason of insanity.

Check out the Mental Health and Substance Use sections- MJ and ETOH are the two substances singled out in 54% of the cases.

During the interview, he says that he had used a lot of marijuana and had taken a lot of the prescription tranquilizer Xanax.

Nikolas Cruz, the teen who confessed to having killed 17 people at a Florida high school, told investigators that he heard voices in his head telling him to “burn, kill, destroy” and that he tried but failed to kill himself two months before the massacre, according to a just-released transcript of his first formal interview with authorities.

As the federal government prepares to legalize the recreational use of marijuana, an Ontario judge has ruled that cannabis-induced psychosis led a man to a seemingly hate-filled attack on a family, in what appears to be the first case of its kind in Canadian criminal courts.

Smoking cannabis DOES make people more violent: Project confirms for the first time that using the drug is the cause of crimes. Cannabis users are more likely to commit violent crime, pioneering research has shown. *It warned those who smoke the drug regularly run an increased risk of using violence against others. *The project is the first to demonstrate that cannabis is not only linked with violent crime but is the cause. *Violent incidents monitored by the study based on the lives of more than 1,100 American psychiatric patients included assaults, attacks with weapons and rape Read the full study here:

BackgroundViolence is a major concern and is prevalent across several mental disorders. The use of substances has been associated with an exacerbation of psychiatric symptoms as well as with violence. Compared to other substances such as alcohol and cocaine, existing literature on the cannabis-violence relationship has been more limited, with most studies being conducted in the general population, and has shown controversial results.

Marijuana is thought to make people mellow, docile and lazy. However, with some chronic use and the new high potency strains, users are becoming violent and dangerous. Here are just some of the cases that are in the news.

New Research on Marijuana and Murder

Marijuana and Violence: Know the Connection

Michigan College Student Shoots Parents when they Come to Pick him Up for Spring Break,/h3>

But the student told us – Davis had stopped going to class and seemed to be smoking a lot of marijuana. “I know he dropped all his classes, cuz he’d just chill in his room and smoke weed all day he had no ambition or nothin’,” he says.

Who is the CMU shooting suspect?

WXYZ is learning more about 19-year-old James Eric Davis through students who know him. One student – who did not want to be identified — told us that Davis often talked about his gun. “He always had a gun and he’d bring it up every now and then,” the student told us.

Moments after barreling his car through the crowded sidewalks in Manhattan’s Times Square, Richard Rojas told a traffic agent, “I wanted to kill them all,” according to a criminal complaint. A troubled man with a history of drunken driving, Rojas bolted from his maroon Honda Accord after his deadly midday rampage on Thursday that left one person dead and 20 others injured. 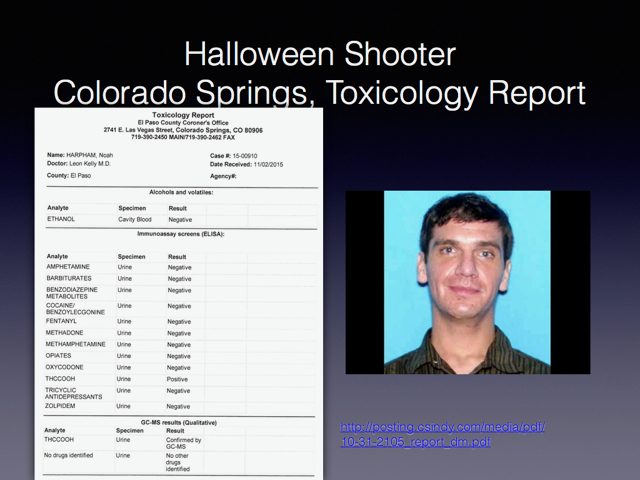 Planned Parenthood Shooter and Marijuana from a presentation by Dr. Ken Finn 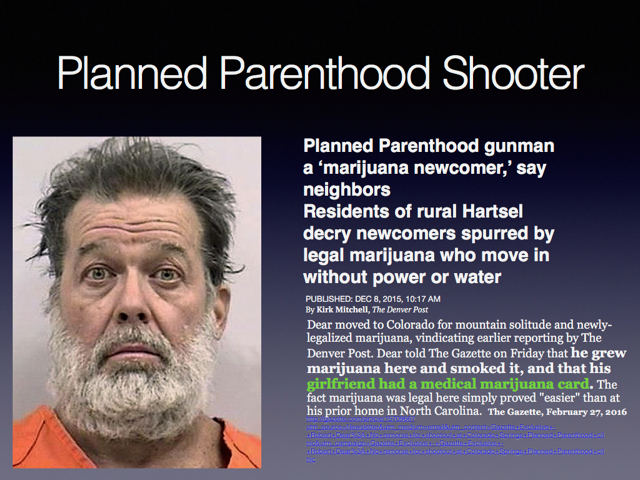 Tributes paid to mother and daughter ‘stabbed by schizophrenic son’

Forensic officers are scouring the scene of the double murder in north London Hannah Cohen, 33 and her mother Leah, 66, were found by police on Friday Both women suffered fatal stab wounds at their Golders Green home Officers have arrested Joshua Cohen, 27, over deaths of his mother and

A self-confessed teenage “pothead” is suspected of fatally shooting his mother and father after they got mad at him for trashing their Alabama home after a party he threw, police confirm to PEOPLE. High school senior Jesse Holton, 17, has been charged with murdering his father, Mike Holton, the former mayor of the family’s hometown of Eclectic, Alabama on Elmore County Sheriff Bill Franklin tells PEOPLE.

Aaditia and Patricia Beer, of Queens, New York, let son drive their Subaru Joseph Beer, 17, lost control and crashed into woods in Long Island The parents of a teenager responsible for the high-speed car crash that killed four of his friends are facing jail for letting him drive their car.