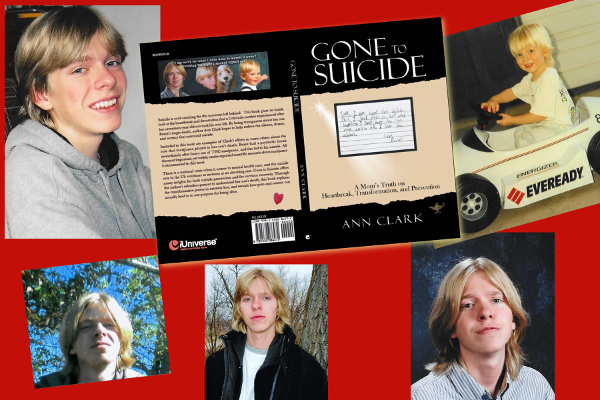 Ann Clark’s book, Gone to Suicide–A Moms’ Truth on Heartbreak, Transformation, and Prevention is an intimate personal story and a handbook for the survivors of suicide of a loved one. It also gives insight which would be valuable to counselors, pastors and friends who are trying to help such survivors. It is written by a mother whose only son’s life ended at age 17, by suicide. According to his mom, Brant Clark is among the nation’s first known cases of marijuana-induced-psychosis linked to suicide. Brant’s death occurred in 2007, in Boulder, CO, well before the state of Colorado legalized recreational marijuana. 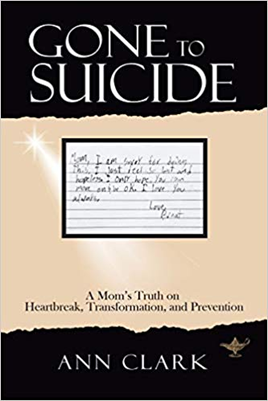 The book begins with a sensitive portrayal of life as a surviving family member, which really will benefit anyone struggling in the aftermath of a suicide. Surviving family members truly have very few peers who can fully understand or speak to their loss. Thankfully, suicide does not directly affect most families, but unfortunately, it is an increasing occurrence in our culture. Among the grim statistics outlined in the book, Colorado, between 1999 and 2016 saw a 34% increase in suicide– the 5th highest suicide rate in the U.S. 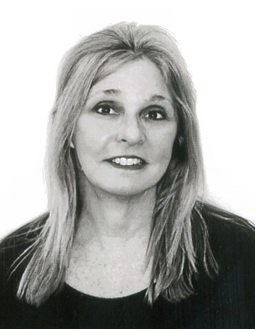 Ann Clark says, “Let’s let the crisis of suicide be a turning point for us survivors.”

Ann counsels others to use their stories to help save lives. She advocates for more openness and transparency as a means of healing for oneself and selfless giving to others with similar needs.

The author honestly shares the path she found to gain strength and move through the grief, stigma, and overwhelming loss. Ann Clark lights the way for any family who suffers this great tragedy, regardless of the root cause. The author graduated from college with a degree in comparative world religions, thus she capably explores the spiritual dimensions of this issue in an ecumenical way. Gone to Suicide gives concerned professionals a book to offer their patients/clients/parishioners which will further their healing and recovery. Especially important for parents, romantic partners or siblings dealing with feelings of personal guilt post-suicide of a loved one, Ann Clark deftly puts that out of the question.

The second half of the book is a diagnosis of the cannabis-induced-psychosis implicated in the death of her son. Unlike the denial of many marijuana users, Ann’s son Brant believed that his heavy use of this drug caused irreparable damage to his brain. Shockingly, and yet so typical of other stories told on the website, MomsStrong.org, Brant found it difficult to convince his doctor of this fact. For this reason, it would be good to recommend this book (or gift it) to any medical or psychiatric professional. It will enhance their understanding of the marijuana-psychosis link, and help them identify the symptoms. The book is well- footnoted with current science on the subject. Once a professional reads Gone to Suicide, they also will be better able to meet the needs of people they encounter who are grieving a death by suicide.

Another important outcome of cannabis-induced-psychosis, covered in the closing chapters of Gone to Suicide, is violence directed at others. Ann Clark boldly shares that she never felt afraid of her son until she witnessed him in a state of psychosis. In her son Brant’s case, he only inflicted harm on himself. Yet, other psychosis incidents result in outer-directed violence and murder. She goes on to identify the many instances of mass murder perpetrated by known marijuana abusers. Many mass killers widely publicized in national and international news stories were likely suffering psychosis from marijuana use. As we know, many such mass killers end their spree with self-inflicted suicide or suicide by police. Sadly, the tragedy in such a case is compounded by so many innocent victims. The families of these innocent victims need to be aware that drug-related mental illness was at the root of their family tragedy. An explained tragedy is much easier to understand than the inexplicable one. Ann Clark’s book is one sensitive way of introducing this knowledge.

Ann Clark concludes, “We need statistics, tracking, and accountability for the role that marijuana plays in the sudden increase of both suicide deaths and of mass casualty violence in America. Full disclosure of toxicology and drug testing reports in all of these incidents should be mandatory.”

Were the author to get her wish, and the media to report such test results, we can possibly increase public awareness of the mental health harms of marijuana, and stem the rising tide of American psychosis cases and the resulting suicides.

Anyone who reads this book will become more compassionate to those around them suffering grief and loss. It is important for each of us to understand fully what someone experiencing tragic loss goes through, the emotions, the sensitivities, the feelings of alone-ness. Read this book to become wiser and more ready to really ‘be present’ for a grieving friend. 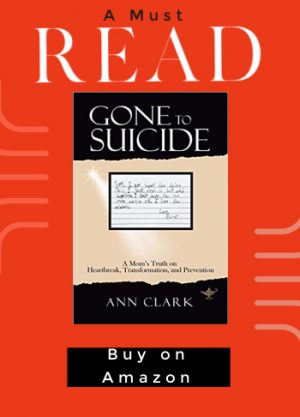 Click on the orange graphic on the left to visit the Amazon book store. Please purchase the Gone to Suicide book, and afterwards write an Amazon review! Your positive review will help the book get more notice to relevant readers. An activist project would be to buy a few extra copies and give to the professionals that you know, as suggested in our review.

MomsStrong.org thanks you for your support in helping us educate about the mental health harms of marijuana!