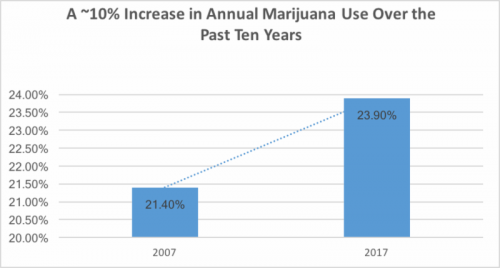 Virtually All Other Substances Decreasing

(December 14, 2017 – Alexandria, VA) – The Nation’s annual survey of students reported today marijuana use among all grades was higher than last year, signaling that marijuana use is rising in a growing culture of acceptability. The survey also found that students in medical marijuana law states vaped marijuana at higher rates than students in other states, and consumed pot edibles (that can come in candies, sodas, or ice-creams) at double the rate than in non-medical marijuana law states. Virtually all other substances are at their lowest point in the history of the survey. The survey does not include youth who drop out of school.

“The marijuana industry is today’s Big Tobacco. They are to blame for the fact that THC candies and vapes are becoming increasingly popular among young people at a time when almost every drug using behavior is steeply falling,” said SAM President Kevin A. Sabet, Ph.D. “Almost every drug other than marijuana is going down. Without lax laws and the massive commercialization of pot, it is likely we would also see a decrease in marijuana use too. These numbers are a wake-up call for the public and elected officials.” Just last week, other data from the federal government found that Colorado was the #1 state in the U.S. for first time marijuana users 12 and over. Young adult use also soared in legalized states at a much faster rate than in non-legal states. From Monitoring the Future:

Overall, 43,703 students from 360 public and private schools participated in this year’s MTF survey. Since 1975, the survey has measured drug, alcohol, and cigarette use and related attitudes in 12th graders nationwide. Eighth and 10th graders were added to the survey in 1991. Survey participants generally report their drug use behaviors across three time periods: lifetime, past
year, and past month. Questions are also asked about daily cigarette and marijuana use. NIDA has provided funding for the survey since its inception by a team of investigators at the University of Michigan at Ann Arbor, currently led by Dr. Richard Miech. MTF is funded under grant number DA001411. Additional information on the MTF Survey can be found at www.drugabuse.gov/drugpages/MTF.html. The University of Michigan press release can be found at http://monitoringthefuture.org.

Smart Approaches to Marijuana (SAM) is a nonpartisan, non-profit alliance of physicians, policy makers, prevention workers, treatment and recovery professionals, scientists, and other concerned citizens opposed to marijuana legalization who want health and scientific evidence to guide marijuana policies. SAM has affiliates in more than 30 states.