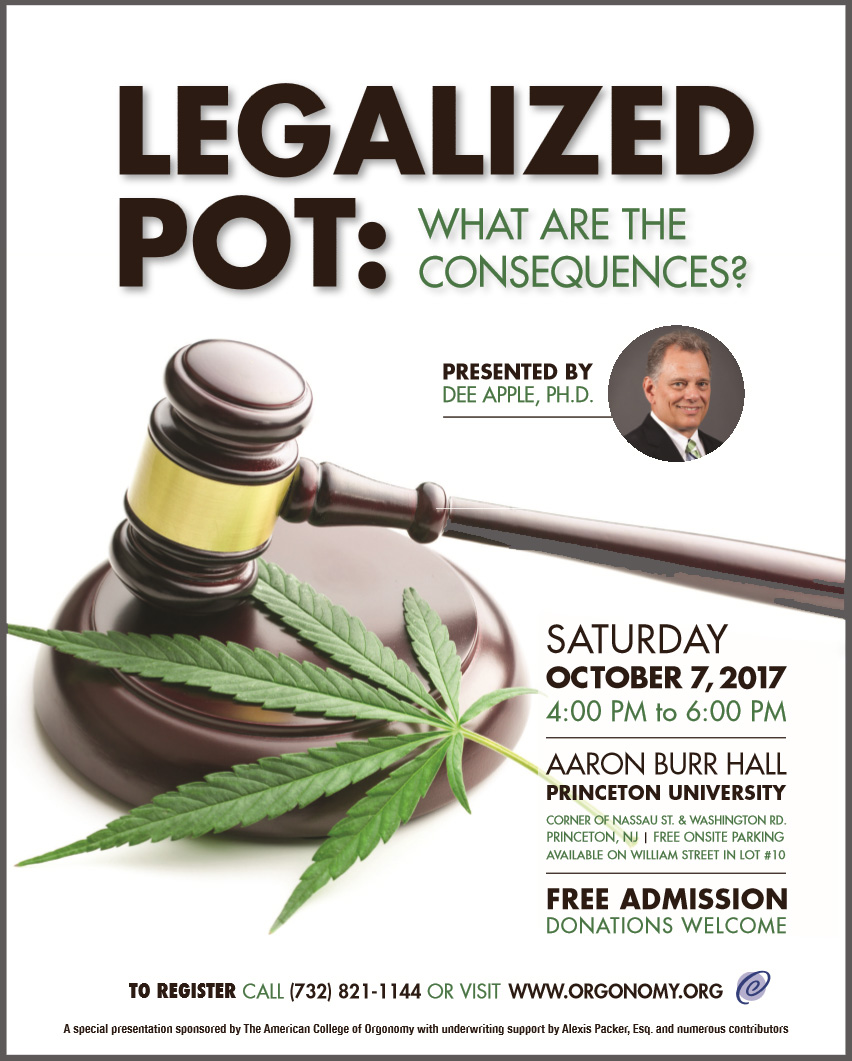 A psychologist who works with teens afflicted with substance abuse is concerned about the wholesale legalization of cannabis and cannabis products. He writes extensively about the role marijuana plays in social and individual chaos. His perspective is an important one in the legalization debate, as he deals with the harms firsthand and knows the tragedy of families facing an addiction crisis.

For a discussion based on the straight facts, join Dee Apple, Ph.D. for “Legalized Pot: What are the Consequences?” a presentation on Saturday, October 7, 2017 at Aaron Burr Hall, Princeton University, Corner of Nassau Street and Washington Road, Princeton, NJ from 4:00PM to 6:00PM. Admission is free thanks to the generosity of supporters. Suggested adult, non-student donation is $45. Reservations are recommended. Call (732) 821-1144 or make your reservation online by visiting www.orgonomy.org. A video is being made of the presentation and will be available on PopPot.org and MomsStrong.org after the event. Dr. Apple will be sharing the latest scientific information about marijuana and clarifying many misguided myths from his perspective as a clinical psychologist with over forty years on the front lines working with adults, adolescents, and young people who have battled substance abuse problems. Included will be discussion about medical marijuana; how pot effects cognitive and social development and functioning; performance degradation such as its effects on driving, and much more.

Questions and Answers About Marijuana with Dr. Apple

More about the Speaker

Dr. Apple graduated from the University of North Carolina with a B.A. in Psychology, and received his M.A. degree and Ph.D. from the University of South Dakota. Dr. Apple is a licensed clinical psychologist in private practice in Princeton, director of psychological services at the Lawrenceville School, and consulting psychologist at the Office for Disability Services at Princeton University. He is a Clinical Associate of the American College of Orgonomy (ACO), on the faculty of the ACO’s social orgonomy training program, and also director of the ACO’s CORE research group. He has spoken on a wide range of topics as well as published numerous articles in the Journal of Orgonomy. The role of marijuana in inducing individual and social chaos: A bioenergetic perspective. Presentation at the Annual Scientific Conference of the American College of Orgonomy. October, 1999. (Also published in the Journal of Orgonomy).

About the Event Hosts

The American College of Orgonomy (ACO) is a nonprofit educational and scientific organization located near Princeton, New Jersey, that is devoted to setting and maintaining standards for work in the field of orgonomy, the science developed by Dr. Wilhelm Reich.The College conducts a postgraduate medical orgonomy training program for qualified physicians and psychiatrists. Medical orgonomists offer a unique form of treatment that is based on a scientific understanding of the connection between the mind and the body. This approach effectively treats a wide range of emotional illnesses, usually without medication.