Maryland Please Vote No on Question #4 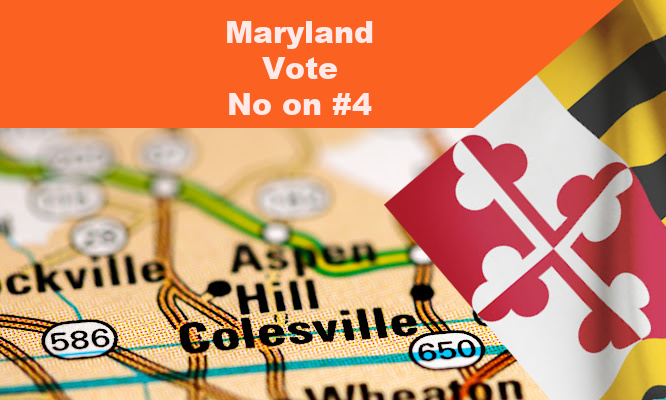 Maryland is about to vote on one of the most complicated ballot questions it has ever faced, whether to legalize marijuana or not. Such a direct democracy approach works when the voters understand what they are voting on. If not, that’s what we have a representative democracy for, to allow our elected representatives the opportunity to learn about complex topics from expert testimony and then to vote consistent with what they feel will most benefit their constituents.

The complexities of ballot question #4 on marijuana begin with its impacts on the brain, from negatively affecting cognitive skills and academic achievement to substantially increasing risk for anxiety, depression, psychosis and suicidal behaviors. Developing psychosis from marijuana use is now the most well-replicated, high impact factor discovered for schizophrenia, which affects about 0.87% of the population, and the relevance of marijuana is made clear by the 5.4-fold increase in schizophrenia prevalence for daily users: i.e. about one out of twenty if they don’t quit. In addition to the tragedy of the disease, the cost of schizophrenia is very high because it is generally a lifelong disease, estimated in 2002 dollars to be about $62.7 billion per year in the U.S., in treatment, housing, sustenance and lost earning potential. In today’s dollars that’s about $100 billion per year. This is a social cost that is borne by all of us through taxes, as most affected individuals do not have the financial resources to cover their needs.

Other nuances of legalization the average voter is probably not be aware of can only be made clear by studying what has happened in other states. Young adult use has increased by about 66%, on average,and that is the age range encompassing the peak age of schizophrenia onset. Youth visits to urgent care for marijuana-related psychiatric problems tripled in Colorado during the time period of the roll out of legalization. The promise of improved social justice and eliminating the black market have not been realized. Racial disparities in arrest rates for marijuana possession persist for quantities over a specified amount. In addition, the number of police interactions with minority dealers have increased because the black market boomed in all states that have been legalized for long enough to allow a new equilibrium to be established. Overall growth in the number of monthly consumers occurred as you might expect, increasing by 67% in the first 5 years after the 2014 commercialization of recreational outlets in Colorado, for example. The increase in total purchases may have been even greater, as existing users upped the frequency of their consumption and this expanding consumption meant that the legal dispensaries and the black market could grow in tandem, with the black market able to compete successfully because their products are untaxed, lack regulatory fees and in addition to sales to adults, are sold to youth.

An increased traffic fatality rate is perhaps the one outcome that most voters may have in the back of their minds as they vote. Based on data from legalized states, if all states go down this path, the U.S. can expect about 6,800 additional road deaths per year.

Let’s hope that Maryland does not choose to follow the path taken by 19 other states. If most Marylanders were to vote no, it would be based on their gut instinct rather than any public service messaging on mental health or social justice facts, because no education has been offered by relevant state officials on this complex topic.

The Mental and Behavioral Health Commission, set up by Lieutenant Governor Rutherford a couple of years ago, has been silent on the issue, as has the Governor himself.

Christine L. Miller, a Maryland resident, holds a Ph.D. in Pharmacology and has dedicated her academic neuroscience research career to the causes of psychotic disorders, including schizophrenia (ORCID https://orcid.org/0000-0002-3997-9215 ). She currently volunteers her time as a science advisor for national marijuana education groups, including Moms Strong and Smart Approaches to Marijuana.

Editors Note: Please forward this article to any Maryland voter you know. it is on the ballot this midterm election.