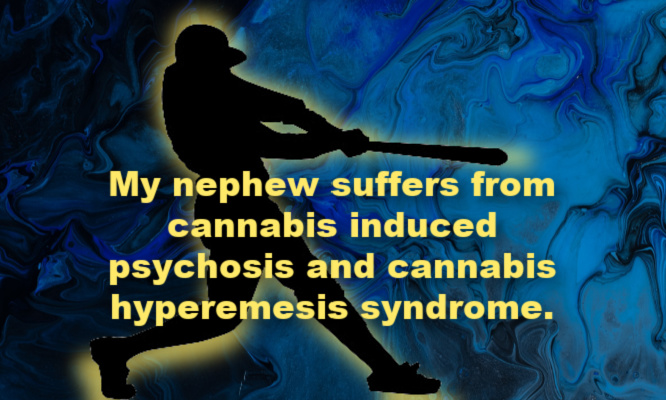 I am JT’s aunt and raised him. Both his parents didn’t raise or tend to him. JT was once an ambitious, motivated honor roll student. He loved playing sports (baseball, football, and basketball), was par to the beta club, and was college bound. He experimented with marijuana in 12th grade mid-year after learning his biological father had passed away months before. He was hurt he didn’t know him, and his grandparents didn’t know JT or care to meet him. They all have lived roughly 40 minutes away from JT his entire life.

Instead of becoming excited with graduation, he became withdrawn and stopped doing schoolwork. He used marijuana and no longer cared about himself. He decided not to take an important test at the end of the year knowing he would still pass. He went from a 3.8 grade point average to a 3.1.

JT moved to Albuquerque NM a little over a month ago. He suffers from cannabis induced psychosis (CIP) and cannabis hyperemesis syndrome (CHS). He was clean and not using but I got a call from a Walgreens that a prescription is ready. I hang up. Try him. No reply. I call Walgreens back and click the “more info” option and find out he has 2 prescriptions for nausea. The total is $208 and he is flat broke. He is once again suffering from CHS.

I am not sure if his psychosis has returned but with his last CHS episode, his psychosis came a few days/couple weeks after. I pray for a recovery for him and when I post about the negative effects on it, I don’t read or look at the laughing, smiley faces in response. I post a confirmed article and hope one person sees it and chooses not to experiment. JT’s doc says that he has to stay off marijuana and with temporary medication, his brain and stomach may recover.

He needs to make better decisions and learn who his real friends are. I never want to see him in psychosis again, to witness him out of his mind. Very heartbreaking and numbing. While it was happening, he swore to me he used nothing else and drug testing showed it was just marijuana. The ER doc is the one who let us know….marijuana has him this way and we were shocked because we had never heard of it causing psychosis. The ER doc taught us about CHS. The mental hospital kept him for 9 days and told me from day 1 about CIP. She encouraged me to go home and research it because you hardly hear of it and instead hear of the states legalizing it. I raised him to stay away from it, even though states were legalizing it. It is heartbreaking to see so many families suffering from this. My heart hurts for all. I wish we had a better wake up way to make sure people NEVER try it.

I wait, cringing at home. I live with chest pains. EVERY. SINGLE. DAY. I have prayed and still pray. It will take a miracle for him to get it together and I hold onto that hope. He continues to hold onto the same friends who have seen him at his worst and they still smoke in front of him. I have tried telling him they are NOT friends.