Help Me, Help My Son 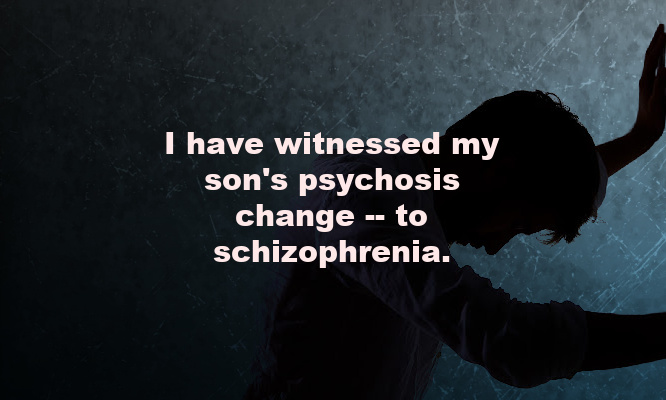 My only son is 34 years old.
He’s an adult – he lives his adult life.
He has a job that allows him to pay his rent – pay his utilities – pay his car payment – and buy his marijuana.
Living in a state where marijuana is ILLEGAL.
Last year, I had a road trip with him – and I was the driver – I had a captive audience and asked him – WHY he began – and WHY he continues.
He told me that I wouldn’t understand.
He told me that I do not have an addiction problem and I just “wouldn’t get it”.
I told him that I loved him – had been through so much with him – and just wanted to know more.
so he told me…..
It started when he was 14 years old – and he loved it.
He was offered a joint after a high school football game – he smoked it – became very sick and swore never to touch it again.
He was offered a joint at a different friend’s house two weeks later – and smoked it – and loved it…. his exact words….”I loved it”.
Marijuana then became his “go to” drug.
He hid it from his father and I – he began smoking it regularly – every day….and his grades began to fail.
He was arrested for reckless driving at the age of 16 and broke probation and was taken from the household as “out of control” and placed in juvenile detention.
He was arrested as a juvenile for shoplifting.
He was arrested for possessing a bong.
All juvenile offenses – all juvenile cases – in which he’d tell the therapists/psychiatrist what he/she wanted to hear.
He was evaluated by the Juvenile system – and deemed “fit” and then he’d find that weed again and the path of destruction began all over.
He never completed high school.
His father’s and my marriage collapsed.

His marijuana addiction led to opioids – and he was arrested, this time as an adult – he served time in county jail – he was an informant for the State Patrol – and once, he was “in-between” jobs – he came back home to stay – he stated he was clean and was not on any substances. But, the doorbell rang and about 15-20 Hispanic men were in the driveway – wanting their money. My husband, (his step-father), was calm and collected – found my son – and the money was still in a brown bag – he was the “mule” whom had not delivered. And – his three-year-old sister was in the house and watched everything transpire.

My son’s substance abuse – opioid – cocaine – heroine – meth use started with marijuana. And now – he’s come full circle with that – and prefers to smoke his joints daily – stating these calm him down….and that’s the ONLY substance he needs. Marijuana doesn’t “calm him down” – it just makes his brain think crazy thoughts and his mouth to voice these. He honestly believes that marijuana CALMS him down – and it’s the opposite – it makes him more delusional….and he does NOT know what he is doing. This is what scares me so much….he has absolutely no memory of what he did/does when he’s high.

He is a man whom prides himself in his appearance – and everyone always tells me how nice he is. And he is nice – until he is stoned out of his mind and his mouth just doesn’t quiet. And, over the years – I have watched this intelligent and beautiful person become more angry – more frustrated – and more paranoid.

Although I have never witnessed him selling it – I believe he does.
And – I have witnessed his psychosis change – to schizophrenia.
My husband and I are middle class – we live in a nice neighborhood – have great jobs – and his younger sister is now 14….and last year asked him for some marijuana to smoke…..and he gave it to her.
My husband and I discovered this – and have restricted my son from our house – it is only when he “needs” something that I hear from him.
My son spends a lot of time with his father – a recovering alcoholic – and his stepmother. His father has the money to lend-give him – and this infuriates me – as his father told me that “weed makes our son not aggressive.”
I have not spoken to my son for several months – yet every day – I pray for him.
He has seen numerous therapists – psychologists – and has even tried to take his own life.
I remember in 2017 – after the break-up with his then-fiancé – he was committed to a mental health clinic as he was smoking pot with friends and playing
“roulette” with a handgun in the garage of a house they all rented…and it went off…how no one was injured or killed is unknown – but it scared one of his roommates enough to call the police….and he was then arrested.
He has a new girlfriend now – or so I’ve been told – and she is a believer in CBD oils.
I’m scared – so scared.
I have visions of him hanging himself.
Or asphyxiation – or even his paranoia causing him to harm himself – or someone else.
I don’t know what to do anymore.
Except PRAY.

Submitted by Teresa a mom in Nebraska.