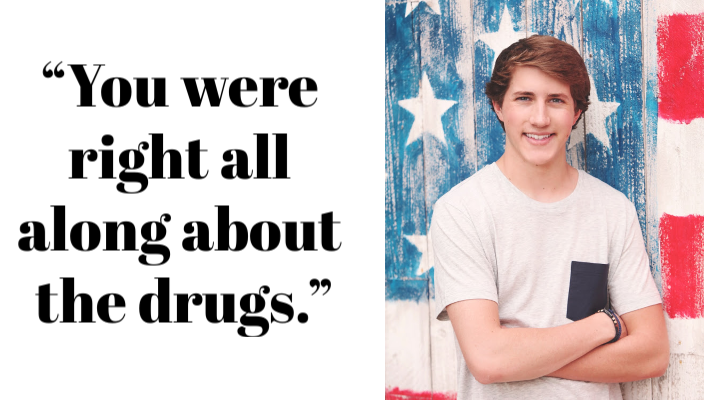 I’m sharing my direct experience of my 19-year-old son, Johnny Stack, who used high-potency marijuana, which triggered psychosis, which led to his suicide. Johnny was 14 years old when legal recreational marijuana came to Colorado. His friend’s brother had a medical marijuana card, and he gave Johnny his first marijuana at a high school party. (Yes, we live in Colorado. Yes, it is everywhere. Yes, your kids can get it too unless you chain them to their beds.) He later started “dabbing” high-THC marijuana (they smoke a very potent wax or shatter form), which triggered bizarre episodes of psychosis, a first suicide attempt, and delusional thinking (the FBI was after him, the world “knew about him,” the mob had it in for him, we were “in on it,” etc.).

We would dis-enroll him from his current university, admit him to mental hospitals, and they would stabilize him with medications, and he’d recover…until he used marijuana again. Eventually, even when he stopped using marijuana, the psychosis did not go away, and he developed schizophrenia.

He was put on anti-psychotics to control the delusion, but he didn’t like how “stupid” they made him feel, because he was extremely intelligent. So, he stopped taking them without telling us (a common problem with the disorder). When he died, he had given up marijuana and wasn’t depressed. But because he wouldn’t take the medications he now needed, the paranoid delusions told him to stop the pain, and he jumped.

Johnny said 3 days before he died, “I want you to know you were right all along. You said that marijuana would hurt my brain, and it’s ruined my mind and my life.” If we didn’t live in Colorado, and he wouldn’t have been able to so easily access marijuana, I know my son would still be with us today.

Rest in peace my beloved son

NOTE: This story was updated by the author on 8/6/2021, based on new information coming to light about the timeline of Johnny’s marijuana use.