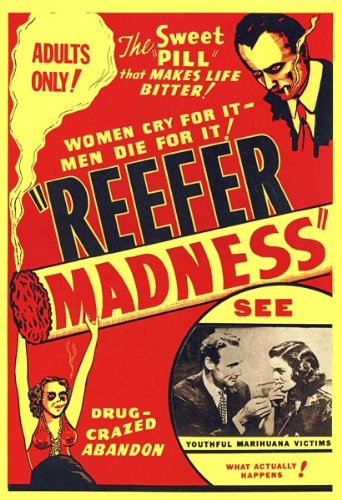 The term Reefer Madness is hurled at us as an insult. Having seen it in the 70’s, I always thought of it as a government issued ridiculous over exaggeration. Turns out there is more to the story.

It was originally filmed by a church group as a warning to parents and was called “Tell Your Children” – the title Alex Berensen used for his upcoming book about the dangers of marijuana, Tell Your Children–The Truth About Marijuana, Mental Illness, and Violence.

“Soon after the film was shot, however, it was purchased by the notorious exploitation film maestro Dwain Esper (Narcotic, Marihuana, Maniac), who took the liberty of cutting in salacious insert shots and slapping on the sexier title of Reefer Madness, before distributing it on the exploitation circuit. Esper was an absolutely notorious figure.”

In other words, Reefer Madness was intentionally over the top. After the production code was enforced in the early 30’s, the only way to show lewd and objectionable material that appealed to the public’s prurient interests was to package it as a ‘documentary’ or otherwise show bad consequences of such behavior – think Double Indemnity or The Postman always Rings Twice where the protagonists are punished for immorality (I’m a TCM fan if you can’t tell.)

Then, “Enter Keith Stroup, founder of NORML (Nation Organization for Reform of Marijuana Laws). In 1971, this enterprising gentleman up bought a print of Reefer Madness for $297, cleaned it up and started showing it at pro-pot festivals. It was gigantic hit. Distributing Reefer Madness to college campuses of the 1970’s helped bankroll the burgeoning film company New Line Cinema, which today is a major player in the Hollywood film industry.”

I never knew that. NORML was behind the distribution of Reefer Madness to influence the minds of a generation while making money at the same time (yes-I saw it on campus in 70’’) and parodying anti-pot people as morons.

Turns out, “Tell Your Children” was prescient. With pot proliferation, we indeed are seeing psychosis, crime, suicide, traffic fatalities-everything in the original film.

I never met Alex Berensen, but I’m pre—ordering 10 copies of his book today to put in waiting rooms of my medical offices.

Learn more about the history of Reefer Madness here, the quotes above are from this history.