Why Legalization is Not a “States Rights Issue” 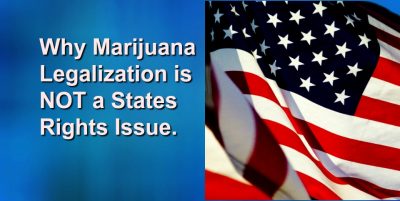 Paul Larkin is a Senior Research Fellow at the Heritage Foundation. He recently published a policy paper. His thesis is that it is a mistake to claim that marijuana legalization disputes should be left to the states to resolve because the states have the right to regulate the practice of medicine. For 80 years, even since the Federal Food Drug and Cosmetic Act became law in 1938, American society has left to the professional, expert judgment of the Commissioner of Food and Drugs the authority to decide what drugs are “safe” and “effective” and therefore may be distributed in interstate commerce. Paul’s position is that there is no reason to treat marijuana differently from any other legal or illicit drug.

Paul Larkin also writes in another opinion piece, that the FDA needs to be at the forefront of marijuana policy.

Few drugs have had as colorful a history, have been the theme of so many cult-classic films or have ignited so many vocal disagreements as marijuana. We are still arguing what to do with it 80 years after Congress passed the Marijuana Tax Act of 1937, which effectively prohibited the non-research use of the drug, and 40-plus years after enactment of the Controlled Substances Act of 1970, which outlawed marijuana.