Did my brother’s teen pot use lead to his schizophrenia?

Because pot is being legalized in more and more states, many young people assume it must be safe. However, when used by people whose brains are still developing (up to age 25), there is an increased risk of developing a mental illness. Recent studies have shown this vulnerability, and the tragic correlation is starkly illustrated by the life of my brother, K. K started getting high at a young age. He smoked just a little bit, almost every day, through junior high, high school, college, and graduate school. To him, it seemed like harmless fun. But within a few years after completing his higher education, he became a homeless drug addict and dealer with schizophrenia. He went to jail eighteen times. Relative to so many others, K’s story ends well. He is alive, out of jail, off the streets, and is sober. He is receiving psychiatric care. He lives in a group home where his meals and transportation are provided and his psychiatric medications are dispensed. He is alive to tell his harrowing story. To warn teenagers that what seems like harmless fun can actually ruin their lives, K and I wrote a book, A NIGHT IN JAIL, that is inspired by his experiences. 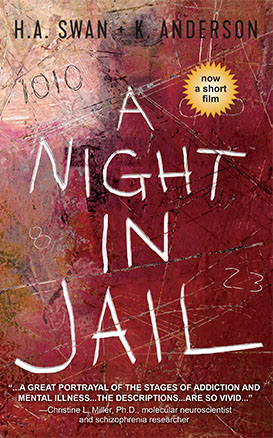 Mug Shots of my brother K