A Double Tragedy for One Family

When you bury a child you die with them. Yet you still wake up each morning and somehow have to function in your “new” normal. I’ve always considered myself as “politically” correct so when marijuana became “medicine” I didn’t think it would ever affect my life. Whether or not my views would have changed my story I will never know. It’s too late for me and many other parents suffering these losses but it may not be too late for those parents navigating the marijuana minefield. Corey and Alyssa were two years apart in age and very close siblings. Corey was always protective of her and she looked up to her big brother and knew that he was always there for her whenever she needed him. Both were popular and had big hearts for other people and each other. Corey excelled in football while Alyssa excelled in academics. The kids had a happy home life where they were loved and thrived up until the ages of seven and nine. I was fortunate enough to be a stay at home mom those young years up until my divorce from their father. Our divorce was the one crack in their life that I could never fill. Marijuana was being accepted in Colorado as “medicine” at the time. I lived in Florida and really never thought about how that casual attitude would affect my kids. Corey had shared with me that he first saw marijuana in middle school. In high school it was a weekend and summer thing with friends at the lake and beach. Florida was the pill mill state by the time Corey graduated high school. He once told me that when the marijuana ran out someone always had pills that were passed around. He stated, “when you are having fun with your friends, you never want that to end. When the marijuana ran out, pills were available to keep the fun going.” I imagine that in a stoned state of mind you would be more open to taking pills that weren’t prescribed to you than if you were sober. We have lost so many young lives in our small town. America’s children have become collateral damage to the wanton greed of others. As easily as Corey and Alyssa had shared a joint or bong, they shared pills on Sept. 21, 2011. Corey died and Alyssa survived. Three and a half years later, Alyssa took her life. Marijuana changes your child first and it changes them forever. 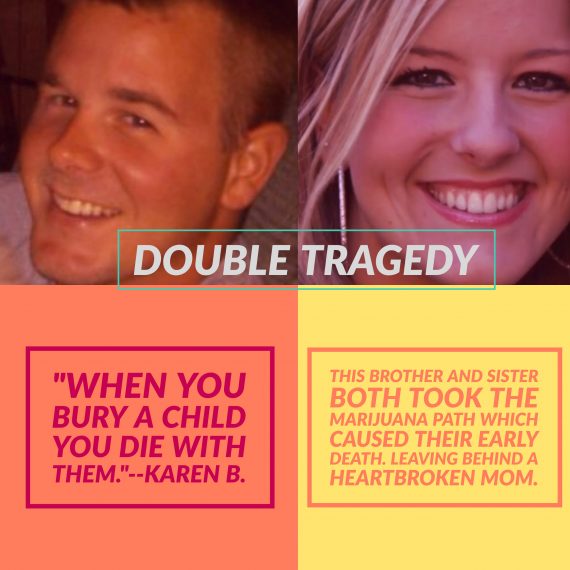