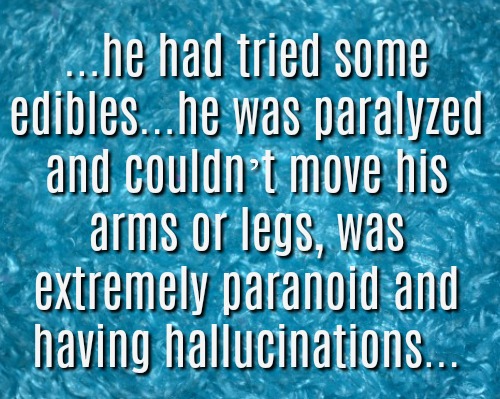 In 2009 when Colorado legalized ‘medical’ marijuana my son was 14. He was an excellent student and athlete, playing soccer, basketball, and track. Things began going downhill for him very quickly. Unbeknownst to me he tried weed with a soccer team friend, and was soon addicted. He started hanging out with new friends who were into skateboarding and getting high (I didn’t find out that they were getting high until much later). My son’s behavior changed radically. He became angry, sullen, and acted very depressed and paranoid. His grades spiraled downward, and he lost all interest in sports and quit playing everything. When I looked at his friends’ Facebook pages everything was about weed. It was glamorized everywhere around us in Colorado.

When I caught him getting high alone in his room one night, I was shocked and horrified. It explained all the behavior changes, but I was scared. My husband smoked marijuana and drank alcohol as a teenager, so he thought our son was just experimenting like he had, and felt it was ‘just pot’. Other adults I talked to echoed these feelings. People would say he was just being a rebellious teenager. We want to believe the best about our kids, and I sort of bought it each time someone would reassure me that way, but then something else would happen and I would be sick with worry. We talked to the school counselor, took him to private counselors, went to our own counselors for help. We threatened, and had rules and consequences – he burned through everything we tried. He stored jars of urine and knew how to rig drug tests. We took his phone and car keys away, so he ran away. I had no idea where he was, and the 10 days he was gone were a nightmare. I found huge amounts of weed, cash, and paraphernalia hidden in the basement, and realized he was selling. We called the cops on him several times – there were many ugly scenes. His grades were now all failing and he missed more classes than he went to. One morning when I thought he was at school I saw him in front of our house in a car with several other stoned/high kids I’d never seen before – I confronted them but no one in the car could even speak intelligibly – it was scary. We had a cleaning service come to our house every 2 weeks and one day I came home and saw their cleaning stuff still sitting in the house, with things left half-done, in a mess. When I called they said the women who were cleaning our house that day were too scared to continue, and were told by their management to just leave our house. My son had brought a bunch of kids over and they were sitting around in the kitchen, high, doing weed and other drugs in the house. I found out later that our son had progressed to ecstasy, acid, prescription drugs, alcohol, etc. He had always said he would never touch drugs – but once someone tries weed (“oh, it’s just pot”…), it becomes so easy to cross the next line, and the next. I remember one night going into the basement to talk to him and he was lying in his bed in obvious fear and agony. He could barely talk, and said he was sick. He stayed in bed for several days that way – I was worried. He told me later he had tried some edibles – didn’t feel anything, so kept eating more of them. He now says that was the worst experience he can remember, because he was paralyzed and couldn’t move his arms or legs, was extremely paranoid and having hallucinations, and in incredible fear – and this lasted for days. Yes, this was “just weed”.

We found jewelry, prescription medicine, and other possessions missing from the house. Our son would barely speak to us, we were at a complete loss. We had nothing to hold over his head – he would run away, he had his own source of money (selling drugs), he physically scared me. We were prisoners in our own home and my heart was breaking. I lived in constant fear and could barely concentrate at work. Our daughter was being deeply affected by the hell we were living in too – I found out later that she had started cutting.

On January 28th, 2013, we had our son kidnapped in the middle of the night and sent to a wilderness program in Utah. It saved his life. It took every ounce of strength I had (plus taking out a big loan and going against what my husband wanted). He spent the next two months at in the high desert near Salt Lake, living in primitive conditions. It was a very hard winter there, and he had to rub sticks together to start a fire to keep warm and to cook the dry beans and bare supplies they are given, make his own backpack. I am forever grateful to the wilderness program, Outback Therapeutic Expeditions. We brought him back to Denver on a Friday and he started an intensive out-patient rehab program (The Cornerstone Program) on Monday. Cornerstone is the second place I will be forever grateful to, as he could never have stayed clean and sober coming out of the woods and back into society without this support.

We are a changed family. We are incredibly blessed and grateful, but we are changed. My son is very intelligent but his IQ has been lowered, and he has memory problems and is not as quick to learn. His life now revolves around recovery – he lives with sober addicts and attends lots of meetings. He just finished a year at community college — we are so grateful and proud – but it is not what we thought his future would be. The money we’d saved for college went to rehab, as did much of our retirement savings. Tonight he is going to a funeral for one of his good friends. It is the second funeral we’ve gone to for wonderful, talented young men who OD’d on heroin – who both started with ‘just pot’. Every one of the hundreds and hundreds of kids in rehab at Cornerstone started with weed. Many of them went on to heroin, meth, and most of them still have symptoms of paranoia and mental illness from weed. At 15 our daughter started down the same path. Highlands Ranch High (in an affluent, good suburb of Denver) is full of drugs and alcohol. Our experience with our son helped us to figure it out with her much faster, and she has now been at Cornerstone for 6 months.

I wish parents everywhere could be educated on how dangerous the super-high intensity marijuana that is sold today (wax, dabs, joints, edibles) is for young people. I hope my family’s story will help.