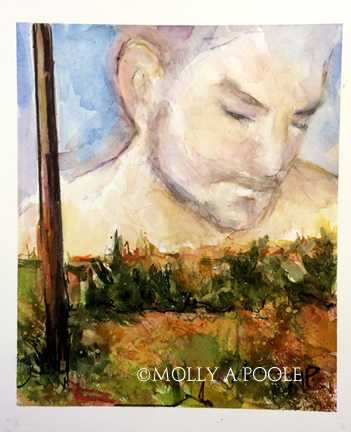 My son, John, adopted at birth, was born to a marijuana-addicted woman. I was told then that, because of his prenatal exposure, John would always be an addict.

I was horrified, but as soon as I thought he could understand, I tried my best to drive the realities home.

As a pre teen, John flourished in academics, sports, and leadership, and I remained cautiously optimistic.

Then came his Junior High School years, and I started losing him. His influencing peer group did a 180, his grades plummeted, and he became irrational and extremely angry. Our relationship crumbled.

No longer recognized for his academic and sports achievements, he was recognized by the local Sheriff’s Department (of which my husband was a member.)

In and out of Juvenile incarceration and failed Juvenile “help” programs, he left home our home in California at 18 and moved on a whim to Florida.

The pattern of use continued, and our only contact was when he needed money.

I finally said “No”, and was verbally berated by the son who used to call me his best friend. Throughout his Florida stumbles, his peer group became even worse, as did his marijuana usage, now combined with methamphetamines.

His last day on earth, Sept 2, 2015, after his “wake-up routine” of drugs, he got into the passenger seat in a car with a 21-year-old girl who had participated in his “wake up routine.” She was driving another friend to purchase more marijuana.

They had been awake for 36-plus hours, and witnesses confirmed erratic driving, drastic changes in speed, driving on the wrong side of the road, and finally crossing the road at 70 mph through a curve warned for 25 mph. Their car took out out a power pole head on (on the front passenger’s side), before wrapping the passenger side around another power pole.

It took two Florida County extraction teams to remove my son’s battered, lifeless body from the remains of what used to be a car. The autopsy showed he had nine broken ribs, a broken neck, and skull fractures.

The unbelievable damage was concentrated at the front passenger compartment. The driver received only a seat belt burn and a scratch on her thigh.

The local Sheriff’s Department was first on the scene and claimed that the driver “appeared normal.” What could be classified as “normal” after such a violent and deadly crash? A painting of John Ross Loria and the section of highway where he lost his life.

As my son’s body was waiting for the coroner’s van, the driver was taken to the hospital. For “medical purposes” the hospital performed a blood alcohol test, but a urine test for drug toxicology! The BAC was negative, as expected, but the urine toxicology was positive for THC and methamphetamine.

The Florida Highway Patrol, conducting the Traffic Homicide Investigation, did not interview the driver for 5-1/2 hrs, and after that length of time, found no “reasonable cause” to request a blood toxicology test. The driver admitted to smoking a “bit” of marijuana the night before, but denied “ever” using any other drugs! When the eight-minute “interview” was completed, the driver walked out of the hospital.

Four weeks later, when we were meeting with the Homicide team, the driver became the “victim” because of her young age and the fact that she had no adult police record. It was repeatedly thrown in my face that my son did, therefore the driver was not even a suspect, regardless of her urine toxicology results and the fact that she perjured herself in the “sworn” interview with the Florida Highway Patrol!

The case was given to the Assistant State Attorney’s office, who would not take the case because the Florida Highway Patrol had not requested blood toxicology from the driver!

After a victim’s impact statement that had everyone wiping their eyes, she was fined $1,000 (payable to the Court), and her license was suspended for six months for causing the death of my 33-year-old son after their early morning party on that deadly day. When the Judge asked her if she had anything to say, her reply was, “No, sir.”

Ironically, it was reported to me that she was seen driving 45 minutes after the ruling by the Judge. Because she did not have insurance, Florida also suspended her license and now there is a warrant out for her.

When I notified the Florida Highway Police where she was working temporarily, so they could catch her driving, the response was one I was too familiar with: “We need reasonable cause to pull her over.”

Cathy Banks, a California mom, shares this story with Momsstrong. Do you have a marijuana cautionary story to share? Please contact media@momsstrong.org.