What is there to tell? That there was once a little boy named Joey. Who laughed and played and loved his two big sisters. That he was only 24 when he died by suicide. What more is there to tell? That at age 14 he began to smoke pot and by age 22 he was diagnosed with major depression and bi-polar. That by 24 he couldn’t live with the demons that whirled inside his beautiful mind anymore. People ask me what came first, the depression and bi-polar or his drug use? I don’t know that answer. But this I do know, he was a normal child growing up. It was in his early teens he began recreationally smoking pot, and much later experimenting with other substances, but his drug of choice, was always marijuana. He loved pot. He was an extreme pot abuser, and as his use escalated so did his behaviors. He was stealing, his grades were plummeting, relationships with family were strained, he couldn’t hold on to a job. My sweet boy was changing before my very eyes into someone I did not know. We tried tough love. I watched one winter night the snow falling on his face as he slept in our back yard. We tried unconditional love, allowing him to live in the basement. We tried every love imaginable. Nothing worked. He was addicted to the weed he loved so much. It wasn’t until he got sober that he realized the pot he thought was calming him was actually causing the anxiety and paranoia he was trying to calm. He was unknowingly fueling the demons. 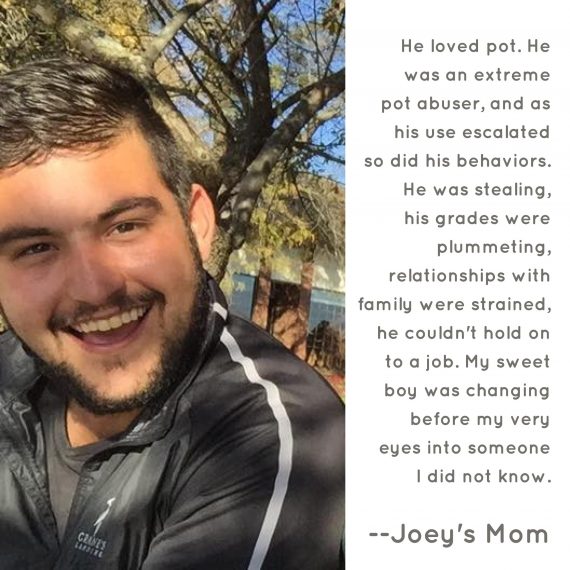 What came first: pot or his mental illness? I will never know. But this I do know: Despite him admitting that marijuana didn’t help him as he had once thought, he went right back to smoking within 7-10 days after his return from multiple rehab. The first several rehabs were strictly because of his insatiable pot use – he tested clean for everything else. It was definitely pot fueling his behaviors. His life was becoming more and more unmanageable, and his depression worsened. He was eventually diagnosed as having major depression with bi-polar, but by then he felt he had no way out of the black hole of depression. Hopelessness ended his life. 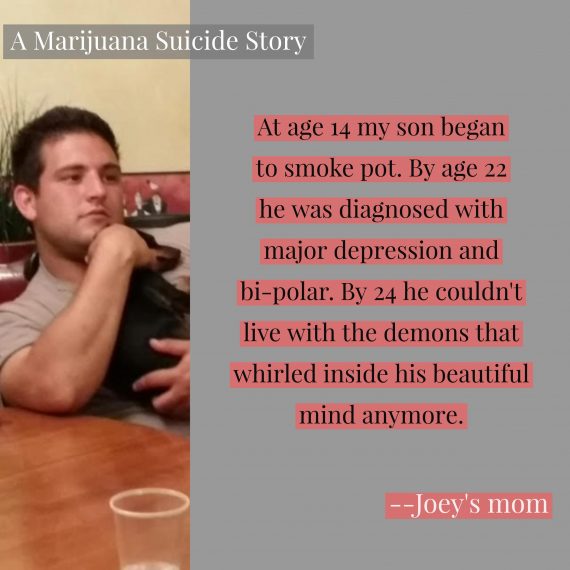 As I said, we will never know what came first, his addiction to pot or his mental illness. But he was a normal child before he smoked. He was in junior baseball league and high school football. He went one year to university to get a BA degree in criminal justice. He aspired to be a police officer. But all that changed as he changed. He became someone I hardly recognized anymore. He was busted for possession on campus and told he could stay, with the agreement that if he got into trouble again he would be kicked out, and all our tuition and housing money would be forfeited. He choose not to return the next year because he knew he couldn’t sustain sobriety and that he would get caught again. This was a pivotal moment for him that would lead us down five more years of pure hell. As he slipped deeper into his depression his drug use escalated. He was no longer recreationally using pot, he was self medicating the growing demons. He was becoming more and more reckless. And while he wanted to be normal, I firmly believe it was his pot use that altered his brain chemistry. It is heartbreaking to watch your child implode. On September 19, 2016 I got the call. I was hoping he was in jail, or was in a car accident. Or accidentally overdosed and on his way to the hospital. Instead this is what I heard: “He is gone.” “Gone where? Gone to Colorado?” I replied. “He was found dead. I am sorry Mama D, but Joey is dead.” My life as I knew it changed that second. My son took his life when he grew tired. I look up to the heavens and ask him, “If you knew then what the outcome would be, would you have made different choices?” We won’t know the answer, but this I do know: I hope my grandchildren don’t grow up in a world where pot is legal. Millionaires become billionaires on the backs and lives of our children’s children. Decriminalize it? Yes. Perhaps. My son died as a felon on possession charges. What he deserves was mandated long-term rehab, with mental health treatment. Not jail. While I do not have the toxicology reports (their cost too prohibitive to obtain) his friend who was with him hours before he took his life did not mention he was smoking pot. I believe this to be true, because Joey was concerned about random drug testing. Pot stayed in his system too long to take that chance. Studies are showing that suicide is becoming more prevalent about 10 months after weed cessation. The timing of my son’s death with when he stopped smoking pot does line up. If this is true, how sad is that? I know some say pot is not a gateway. Perhaps not, but I don’t know many heroin addicts who started with heroin. The point is, marijuana tends to precede the use of other drugs, and that makes marijuana a gateway. Legalizing pot will be the downfall of the next generation. Once it is legalized, there will be no turning it back. My son deserved a chance, but we didn’t know then the devastating effects early onset of recreational marijuana would have on adolescent brains. When you know better you do better. Today we know better, and our child and your children deserve better. I summarize this with a story of a mother standing on a riverbank watching her son struggle to stay above two feet of water. The mother cries out, begs the child to take her hand, that she will pull him to safety. But the son cannot reach out. He tries but he is tired. He is so tired of the fight. His reach can’t grab his mother’s hand. Despite her desperate cries, his pain is all he hears. And as the mother stands screaming on the riverbank, with her hand still reaching out to her flailing son, he goes under and drowns in a mere two feet of water. And the grieving mother is forever changed. Rest In Peace my beloved son. You are forever missed, and I am forever changed.